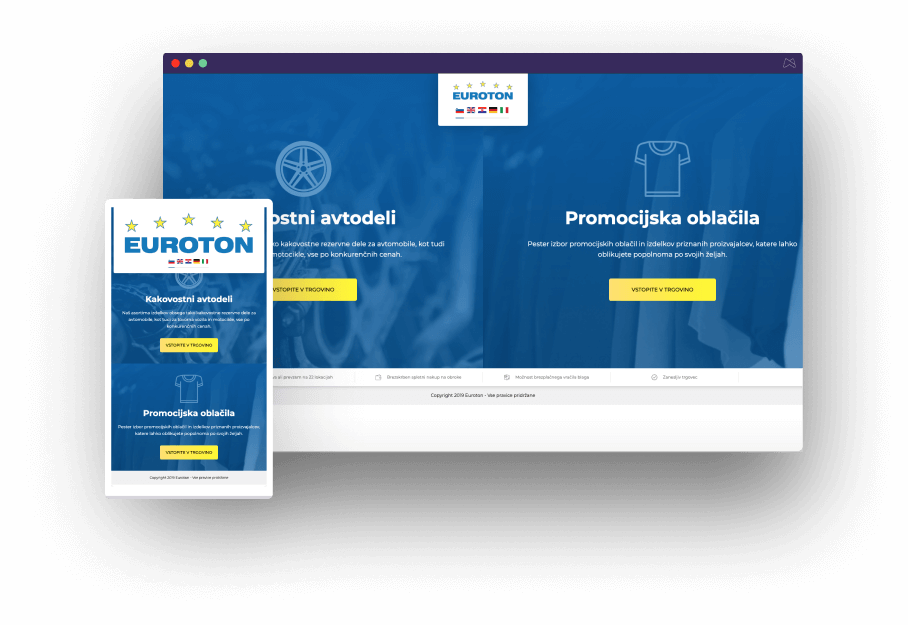 How we increased the sales by 42.2% for Euroton

Euroton is one of the leading Slovenian providers of automotive spare parts and promotional clothing. The larger part of their sales is B2B, but they wanted to increase sales in the B2C segment as well.

Euroton made a smart decision to invest in digital. They had already collaborated with a digital agency, but it was time to test a new partner, us. With SEO, we helped the client to achieve 185.9% higher income, and with Google Ads to achieve 102.6% higher income than last year in the same period.

With off-site SEO to higher income

SEO consists of on-site (technical and content improvement of the website) and off-site (e.g. other links to the website). The best effect is displayed by implementing both activities. In the first phase, Euroton opted for improving the off-site SEO. Off-site SEO activities we performed:

SEO is a long-term process that never ends. But in two months with smart off-site activities we achieved noticeable results for rankings in key categories. Let’s just compare the Google ranking for some keywords before and after two months of our activities.

In such a short period we recorded impressive peaks in Google Analytics; compared to the previous year the organic visits increased by 29.45%. This is not even the most impressive part. Compared to the same period in the previous year, income from organic traffic was up to 182.55% higher. This is the result of ranking higher – we helped Euroton to jump from the third to the first position in Google search results.

Despite the solid work a previous agency had done, we identified considerable improvements for Google Ads campaigns. Campaign management was taken over in the important period of selling winter tyres, batteries and other car parts. We started from nothing and, in two weeks, achieved the low average CPC of 0.13 EUR and reached the first three positions.

How did we achieve this success?

We set up campaigns by precisely segmenting audiences by category, testing ads, customised bids for devices and hours of the day, implementing scripts to automatically adjust bids, ad extensions, and extensive lists of negative words. The Ad Campaign Quality Score is an indicator of the quality of the keywords. More than 60% of them have the highest score of 10.

Success of the Google Ads campaigns

On this basis, we managed to significantly increase the profitability of the campaign, which increased by 102.1% compared to the same period in the previous year; we managed to increase the conversion rate by 259.3%. With the right ads, we addressed the right customers and brought them to the landing page that led to them purchasing the fastest. ROAS (return on advertising spend) measures the revenue per euro invested in advertising. It is expressed as the “campaign revenue / campaign cost” ratio. If the ratio between them is 5:1, the ROAS is 500%. This means that we won 5 euros for every euro invested. If you think 500% ROAS sounds like a good result, check out Euroton’s results. 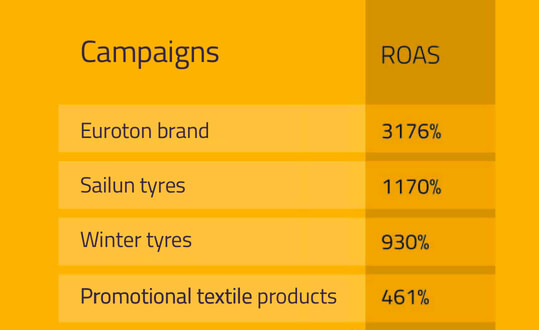 And finally, another impressive result

Euroton sells most of its products in the B2B segment - i.e. business partners. So far, the end customers had not brought them major results and we could have completely forgotten about them, but we decided to consider them as a challenge. With online activities, we increased sales in the B2C segment by as much as 240%. It is certainly no surprise that the Euroton and Madwise story continues even quite a few years later. 🙂